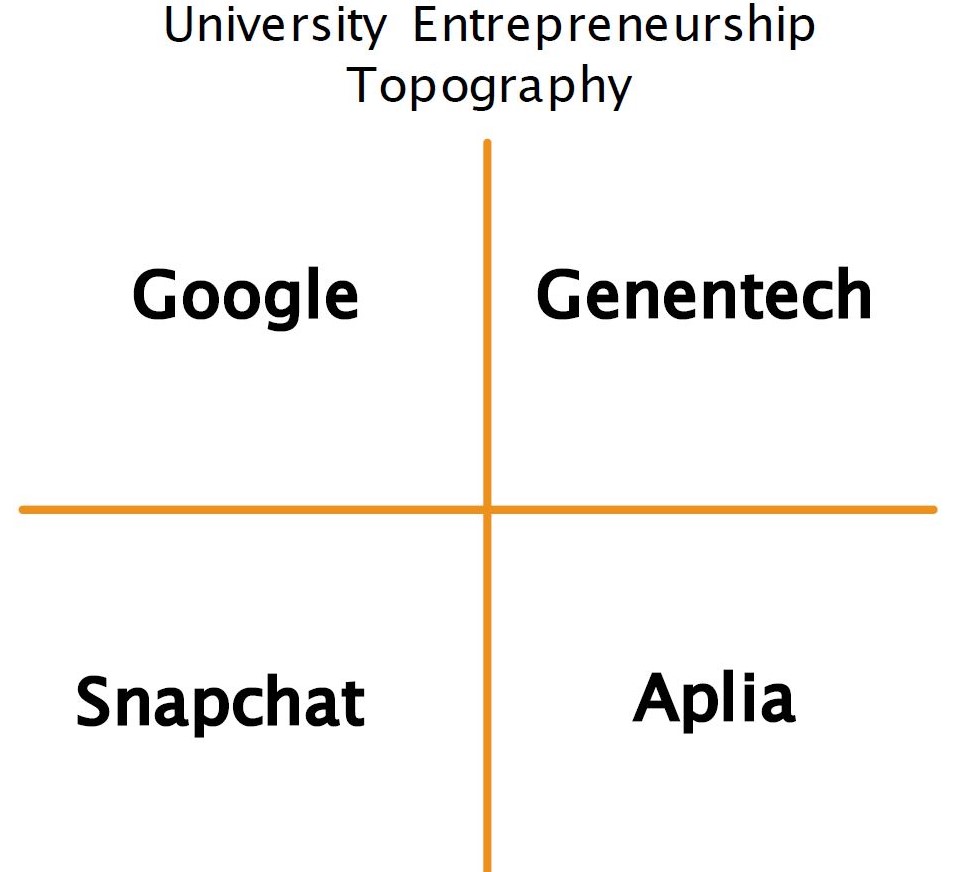 [dropcap]U[/dropcap]niversities around the country are launching initiatives to promote “commercialization” and “entrepreneurship”. But those terms cover a lot of ground. Initiatives that fail to tease out the differences between them are likely to fail, disappointing critical constituencies and leaving important opportunities fallow. 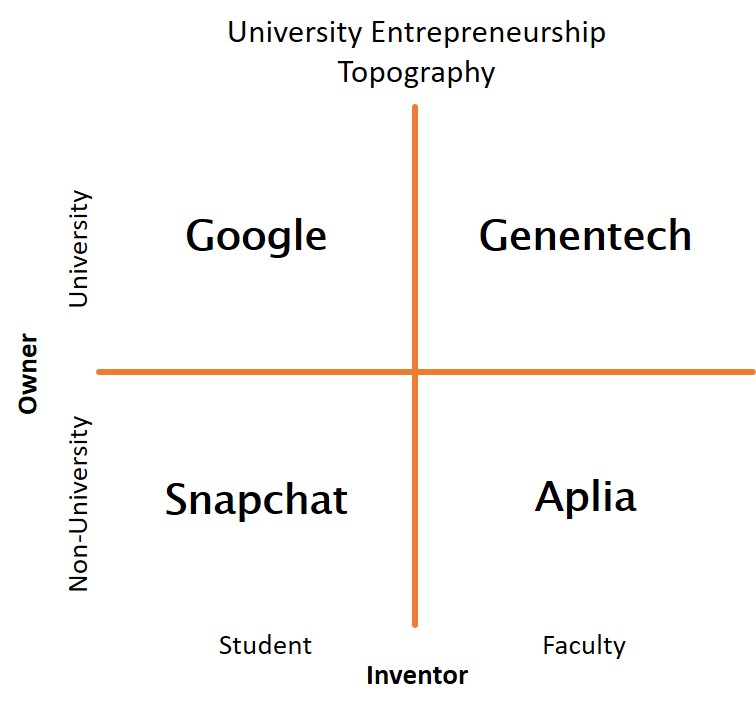 Who innovates:  as a university leader, you have different duties to students and faculty, duties that contextualize your relationship with them regarding commercial matters. In our framework, the left two examples were launched by students and the right two examples by faculty.

The stakes for you, as a university leader, are higher in some boxes than others.  In particular, faculty-generated/university-owned innovation can be especially high stakes.  Commercialization activities in this box have outsized potential to:

(Despite the institutional criticality of the upper-right box, it seems that a disproportionate amount of university effort goes towards supporting the lower-left box:  student innovators/no university ownership.  We are puzzled by this … but then again, we were not early investors in Microsoft, Dell, Facebook, or Snap.)

Let’s go more deeply into each box of the university commercialization landscape framework.  As examples, because they have been well publicized, we will use company examples from Stanford’s entrepreneurship experience.

When it comes to students, most of us involved in commercialization and entrepreneurship seem to agree:  the university’s education obligations are paramount.   It is wonderful that Evan Spiegel and Bobby Murphy could come up with and evolve the idea for Snapchat while at Stanford, but Stanford’s core duty to them was pedagogical, not commercial – to the students, not to their innovation.

This box is filled with good news.  Your campus and your local ecosystem probably offer an abundance of solutions and support.  National partners, such as Blackstone and MassChallenge, can provide best practices, links to mentors, and potentially institutional startup capital.  Also, alumni are waiting to be asked to mentor your students.  There is a pretty good playbook here, including both curricular and co-curricular initiatives:  entrepreneurship classes, incubators, business plan competitions, etc.  Our advice is to implement as much of that playbook as possible, package these initiatives with success stories from your campus, and send the resulting student startups special delivery to the Development office for fundraising wins.  (Be careful, though:  this playbook doesn’t work very well for the other segments in the commercialization landscape.)

In the 1990s, Paul Romer, an economist, had an idea for an education tools company.  Although this idea grew out of his work as a Stanford professor, the university did not have a claim on the underlying intellectual property.  Romer formed the company, Aplia, in 2000 and raised $10 million of launch capital, which allowed Aplia to hire a strong team.  Aplia grew quickly and was eventually bought by Thompson Learning.

Aplia is a great story – not only was it successful, it was successful doing something that advances the mission of universities (education), and the faculty member who started it went on to win a Nobel Prize!

However, this box can be dangerous.  Here is why:

We love this box for its opportunity and flexibility, but as a university administrator, you need to make sure you gate it properly.  Administrative conflict issues should be narrowed down early, and this won’t always be collaborative.  When it comes to commercial work, most conflicts between a university and its faculty are due to ownership and use of IP.  Calling out these conflicts is important.  But when you do this, reach out as a colleague rather than with a reprimand.

When faculty who we work with seem to be roaming down this path, our message is: “Engage the university, because if you don’t launch this company well from the start, you’re killing your options. The world of autonomy you are picturing probably does not exist.”

One of us, Isaac, grew up on the Stanford campus, and he remembers dinner table discussions when Norm Cohen (Stanford) and Herb Boyer (Berkeley) were launching, based on their recombinant DNA and restriction enzyme technologies, what became Genentech … and with Genentech, the entire biotechnology sector.  At the time, patenting the IP from basic research, not to mention putting that IP into a startup and spinning it out, was extremely unusual and not universally approved.  Fast forward to now, and Genentech is the poster child for university spin-outs.

The university – not the inventor – owns innovations in the top row.  This ownership creates hard obligations formalized in the Bayh-Dole Act and soft (but real!) expectations from other key stakeholders that the university will move innovation rapidly and effectively into the public markets.  It also creates compliance, conflicts management, and other oversight obligations.

Unfortunately, this ownership position can put the university into an adversarial relationship with the faculty inventor.   Although there is no way around these difficult conversations, some universities seem to have them more productively.  These universities emphasize support over compliance in their relationships with faculty – acting as colleagues rather than cops.

This box is where Research Bridge Partners does most of our work.  We have developed some counterintuitive perspectives.  For example, we think that the trend is for universities to create too many spin-out companies, that many EIR programs are wastes of money, and that fast-track licenses can be a disaster.  We will cover these perspectives more deeply in other blog posts.

In general, though, our core view of this segment of commercial activity:  if done right, it should be a powerful tool to attract and retain outstanding faculty and directly advance the university’s mission.

Alphabet, Inc., is one of the world’s most valuable companies, with a market cap pushing $1 trillion.  Famously, though, when Brin and Page disclosed their search ranking algorithms to Stanford’s TLO, they were greeted with no fanfare and (if anecdote is to be believed) did not even make the office’s “top 10 list” for the year.

This box is hard:

A lot of value gets left on the table, here.  Since, in our experience, few university programs are tailored to these inventors, and few administrators understand how to value the importance of these co-founders in licensing deals, undervalued or lost opportunities are common.

We handle this box by making the lab – not the IP – our unit of analysis.  We look for IP-plus-post-doc combinations as the core of the spin-outs that we will help catalyze and invest in.  This is not a natural act for most universities; in fact, it’s part of the value that good VCs with deep experience in academic spin-outs bring to the table in the markets where they operate.

One last point, about people.  Our university entrepreneurship topography framework emphasizes that the most important action that a university can take to support entrepreneurship and commercialization, is to curate the university community.  The common action that Stanford University took in all four of the example cases discussed above?  It got those people onto its campus.  It takes Cohens to make Genentechs.  If you want Snapchats, admit Spiegels.  For any university administrator, that’s job one.